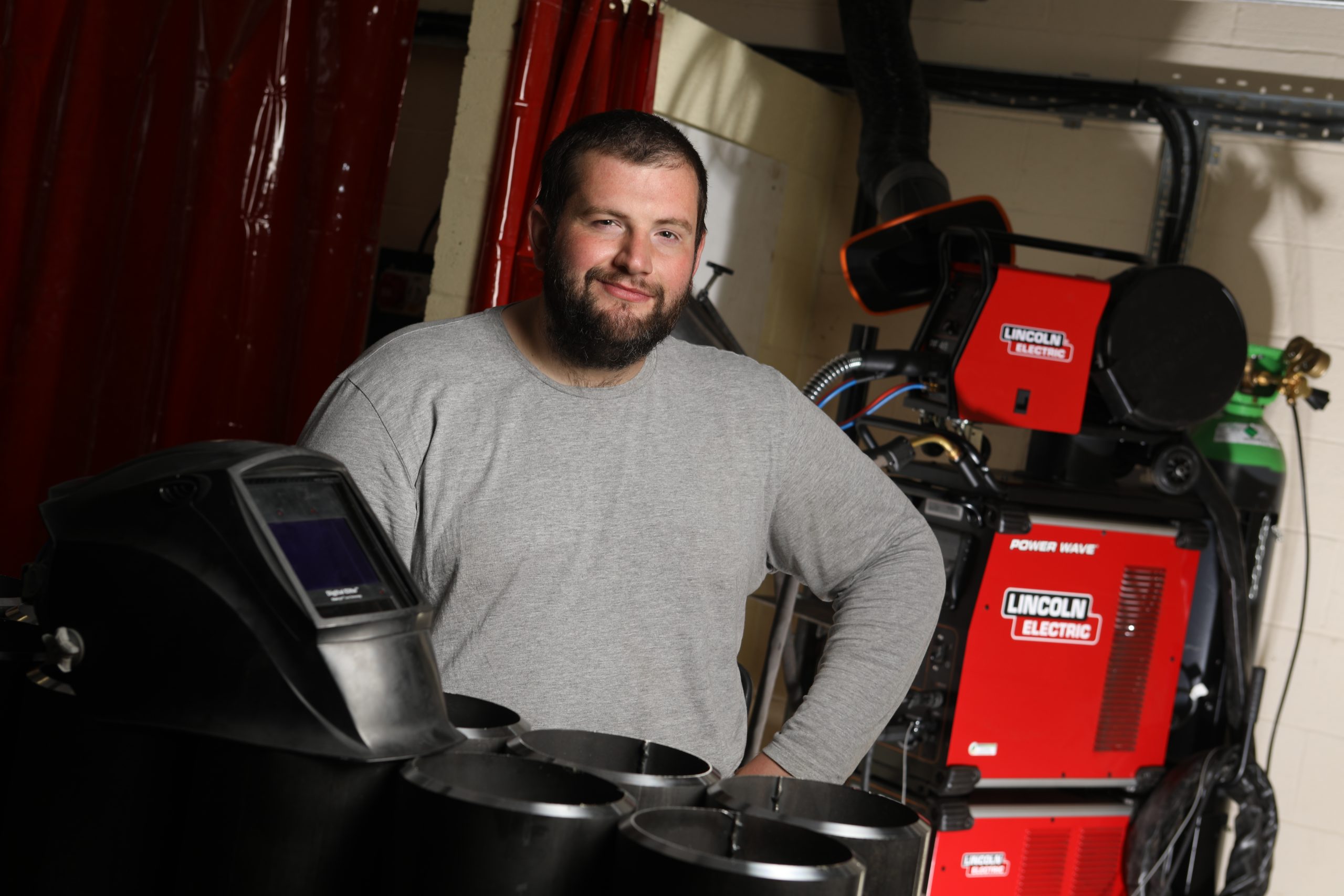 Leaving school and being bored of parrot fashion education, I realised college was not for me. I did take engineering as a GSCE and I also enjoyed science and mathematics.

As a sixteen-year-old boy, I stumbled across an apprenticeship in fabrication with Neta training in Portrack, Stockton, when I missed my interview as an electrician at TTE. The interview took place during the summer holidays and I was successful and started Neta in the September of that year.

My time at Neta was amazing. My lecturer was Raymond “Ray” Knaggs, he oversaw fabrication apprentices during my time there. He was an amazing man! I always remember, his humour, skill and dedication to ensuring apprentices were trained, competent and ready for industry. Ray was a man who would say “You only need a tolerance, for the occasions to mess up, only blob on will do”. The core skills I learned were welding, cutting and shaping materials, 2D CAD design and pattern development.

My placement led me to Barrier Offshore Engineering (BOE) Ltd, on the river of the tees. BOE was structural, pipework and pressure vessel manufacturer. They became an organization that support many offshore projects and tier 1 suppliers. This factory was Dickensian, full of smoke from FCAW and SMAW welding, with two amazing “old school foreman” who ran the shop floor with a cat of nine tails! This place gave me an amazing foundation where I learned and perfected many new skills such as, plate, slab, bloom, billet, pipe tube and bar. I served a four-year apprenticeship, and a fifth year as an improver before becoming a journey man. I also remember working with a welder called Derick Wilkinson, an old hand (one of many in BOE) who came from the ship yard, oil and gas yards in the 1960’s. He pulled me aside once I completed my NVQ and said, “Darren, I am partial deaf, I have pains in my wrists and knee’s and have spent a lifetime of breathing welding fume”, “you are bright enough to go back to college, get out of the game”! I must admit, these words of wisdom echoed in my head for several weeks. I remember thinking, what now then? What course shall I do? Where do I go to learn? These questions are often common in welders, fabricators, but support is always available.

That summer I went for an interview at HFCE, I researched courses and a HNC in fabrication and welding was the next logical step. My interview took place with Mr. David Roberts, then head of the higher national certificate / diploma at Hartlepool. I was asked several questions and the interview was pleasant enough. At the end of the interview Mr. Roberts said, “you are not ready for “My HNC”, I will accept you on to the BTEC which is two years”. My heart sank. Weeks of getting ready for starting a HNC and my higher national went from two years to four! This was the best thing that could happen to me. He was right the HNC would have been a massive step, but I was ready to prove him wrong! The BTEC was amazing, I studied welding technology, welding processes, metallurgy, engineering math’s, engineering drawing and so on. The two years passed in a blink. I remember finishing the second year of the BTEC and informing my employer “BOE” that I had been accepted on to the HNC for fabrication and welding. BOE unfortunately didn’t feel a sponsor onto a HNC as the company didn’t have a position within the office, there was therefore no need to continue onto an HNC! What did I do next? I took the decision to continue with my education and left BOE, I was there six years and I could not progress with further education. I was lucky enough to have saved money to take time off and search of a job, whilst also pay for my first year HNC fees. 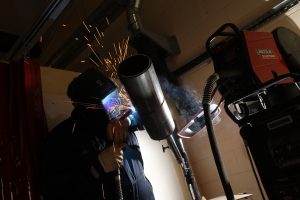 During this time, I accepted a position at Darchem Engineering Ltd as a welder after a successful interview in aero structures. My trade test was a 0,71mm titanium butt weld, there was no button on the TIG torch and a strange foot pedal? A work colleague (Lee Coulthard) supported me through it. Clean the sheet, de-burr, degrease, tack of 16 amps and planish. This was like welding a KitKat foil coming from my previous employer. I remember not leaving my post flow on as the weld cooled and the titanium turned blue across the weld and heat affected zone, this was scrap of course, but I had never welded a reactive metal before.

This was a massive decision to make and at the time the choice of the HND came down to me having a vision of where I wanted my career to go, I have decided to be a welding engineer and there was no stopping me.

During this time, I had applied to become a trainee welding engineer within Darchem Engineering, I got the job after a successful interview. The senior engineer I worked for was Andrew Linford. Andrew has 30+ years’ within Darchem Engineering and his career gave him the experience of many industrial sectors including, oil and gas, nuclear, aerospace, thermal protection and many more. Andrew was a self-taught welding engineer who had learned as many have via experience within a role. He was a engineer who could always create an simple solution for assembling complex parts, he had engineering in his DNA! Although Andrew was never degree qualified, my time with Andrew made me realise that a piece of paper doesn’t make an engineer, it’s the ability to solve problems in the most simplistic manor possible.

On completion of the HND in fabrication and welding, much of my educational knowledge was attained from two lecturers within HCFE. Mr. James Shark and Mr. David Roberts have educated many of known welding engineers within the industry for decades. I owe a lot to these gentlemen, as they inspired me to climb the academic ladder and as high as possible. The next step academically was to continue to the TWI diploma. For the first time my role influenced my education pathway. I did back-to-back welding specialist and welding technologist course within a year! The TWI had some fantastic lecturers, Mr. Darren Jefferies was one of the best. He taught me welding processes, he was a man who understand the level in which he had to lecture “know your audience”. One of the best comments I remember until this day was in reference to welding symbols “BS EN ISO 2553” for fillet welds. He used to say, “you have two leg (Z), and (a) throat”, everyone I speak to who has took part in the diploma remembers this statement. Another useful part of the diploma is the people taking part in the courses, you meet people from every sector, and someone has an experience or knowledge to share. It was during this time I was introduced to my now employer Mr. Peter Lyons.

With the MSc completed and seven years at Darchem Engineering Ltd, I was asked to join the newly formed Welding Development Centre. Mr. Peter Lyons offered me a position as a Welding Engineering Consultant, I won’t lie it was the first time in my career I didn’t know if I was capable of doing a role. However, as Richard Branson says, “If someone offers you an amazing opportunity but you are not sure you can do it, say yes – then learn how to do it later”.

The Welding Development Centre (WDC), this place sling shot my career. Consultancy in my mind was a welding engineer who had spent his/her entire life perfecting their skills, in real life the question falls to can you solve my problem? The Welding Development Centre is an end-to-end consultancy, we build QMS systems for 1090, 3834 and 15085. The WDC witnesses and run WPQR’s / WQ’s and fully co-ordinate testing including travel, we are proud to work with the TWI CL and RINA certification bodies. We also offer the following services...

As a fabricator to welding engineer I have learned that if you have the drive and show willing anything is possible, people are key to success, colleagues, lecturers, industrial colleagues. “We all stand on the shoulders of giants”. Listen to other people, engage yourself in the industry, and always be prepared to learn something new. I would like to conclude by saying, I am here for any individual who is reading this blog in need of support or advice with a career in welding engineering! In this time of struggle the future remains bright, seize the moment!